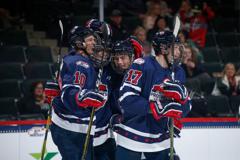 The BioSteel All-American Game features the top American-born prospects eligible for the upcoming 2020 NHL Draft. The annual event, which began in 2012, has seen 188 players that have gone on to be drafted, including 44 first-round picks. The seventh-annual game, which took place in St. Paul, Minnesota, in 2018, featured Team Langenbrunner topping Team Leopold, 6-4.

Tickets for the BioSteel All-American Game are on sale NOW at the USA Hockey Arena box office, by calling 734-453-8400, or online by clicking HERE!

The 2020 BioSteel All-American Game will feature two teams made up of the top American-born prospects eligible for the 2020 NHL Draft, and will be played for the first time ever at USA Hockey Arena in Plymouth, Michigan.

Formerly known as the USA Hockey All-American Prospects Game, the showcase will utilize a new format this season with players from the U.S. National Under-18 Team of USA Hockey's National Team Development Program taking on a group of the best American-born players primarily from the USHL, which is the lone Tier I junior league in the country.