HockeyTV streams games from leagues such as the NAHL, USHL, CJHL and international games with USA Hockey and Hockey Canada. The streaming service has shown over 100,000 games since its launch in 2016.

To begin watching games, you must first create an account at HockeyTV.com. Select the 'Sign Up Now' option and choose which subscription type you'd like to purchase. Yearly ($249.99) and monthly ($29.99) passes are available. HockeyTV is supported by Apple TV, Amazon TV and Roku streaming services, along with all PC, Mac,  iOS and Android devices. 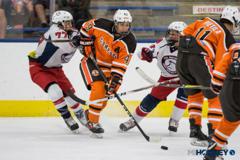 USA Hockey Arena is a multi-purpose arena located in Plymouth, Michigan, opened in 1996. Originally known as Compuware Sports Arena, it was renamed to USA Hockey Arena in 2015 when the USA Hockey Foundation purchased the complex. The building encompasses approximately 170,000 square feet with one main seating level, private suites and press boxes. The design of the arena provides 3,504 seats for hockey games and 4,500 seats for concerts and other events.