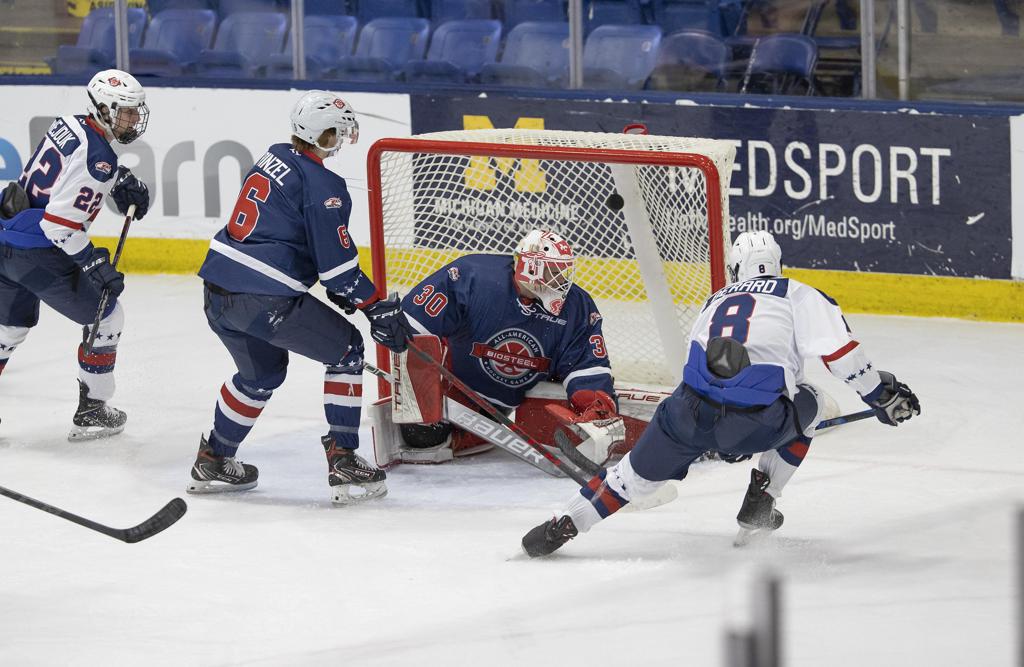 Team Blue came off the opening faceoff quick as Harvey forced an offensive zone turnover to nearly put his team ahead, but Team White netminder Tyler Muszelik (USNTDP/Long Valley N.J.) blocked it aside. Four minutes into play, Team Blue goaltender Dylan Silverstein (USNTDP/Calabasas, Calif.) was tested, turning away a flurry of shots in front of the crease on the penalty kill with multiple Team White player chopping at the puck. 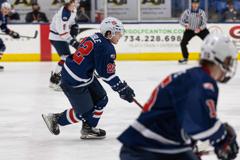 Team White kept it rolling in the second to gain a two-goal advantage less than five minutes into the period. Lane Hutson (USNTDP/North Barrington, Ill.) found Logan Cooley (USNTDP/Pittsburgh, Pa.) on the doorstep who played crafty and went between-the-legs for an initial shot as Cole Spicer (USNTDP/Grand Folks, N.D.) came in to clean up the rebound. Team Blue was inches from cutting its deficit to one with a little over 13:00 to play off a pair of shots but Muszelik denied the opportunities.

After a goalie change for each team at the 9:50 mark, Team Blue notched its first goal of the game with help from Jimmy Snuggerud (USNTDP/Chaska, Minn.). U.S. National Under-18 Team (NTDP) teammate Cutter Gauthier (USNTDP/Scottsdale, Ariz.) skated into the zone with the puck and left it near the blue line for Snuggerud who snapped it passed Team White goaltender Gibson Homer (Chicago Steel/Grand Rapids, Mich.). However, Brady Berard (USNTDP/East Greenwich, R.I.) retook a two-goal advantage for Team White after he finished a bounce pass off the boards.

Team Blue kept the game tight and closed its deficit to one goal off the blade of Cole Knuble (Fargo Force/East Grand Rapids, Mich.). A backhand shot from the slot found the back of the net after a wraparound dish from Vincent Borgesi (Tri-City Storm/Philadelphia, Pa.). A broken-up play from Team White gave Rutger McGroarty (USNTDP/Lincoln, Neb.) a breakaway opportunity who flipped the puck over the glove of Homer to tie things up with 2:37 to go which forced the game into overtime.

An odd-man rush 2:30 into three-on-three overtime gave Carfagna the time to send one to the back of the net to complete the comeback for Team Blue by a final score of 4-3.

NOTES: Forty-two players who competed in today’s game are committed to NCAA programs… Tyler Muszelik is the sixth goaltender in BioSteel All-American Game history to stop all shots faced… Rutger McGroarty was named Player of the Game… Team White outshot Team Blue, 36-26… Both Team Blue and Team White were 0-for-2 on the power play… For more information about the BioSteel All-American Game, click here.